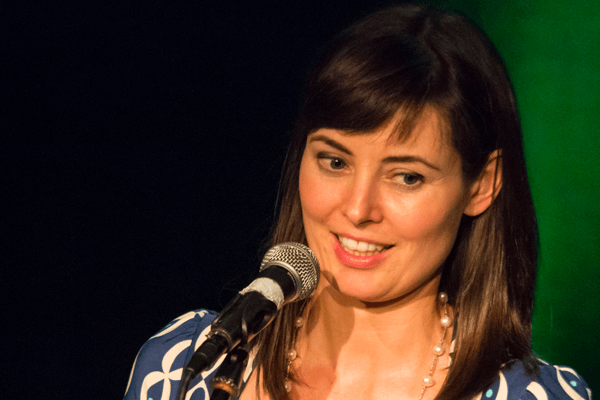 Aideen began her own journey in singing and performance as a young child singing along to theme songs and jingles on the TV. This early exposure to music and the joy she got from singing as a child was a big influence on the development of Aideen’s music skills. Aideen progressed to singing in her mother’s church choir and then moving on to perform on stage in school musicals and a lead role as Polly in the AIMS award-winning musical The Boyfriend and most recently as Betty in Irving Berlin’s White Christmas.

While going down the ‘sensible’ route to pursue a BA in Psychological Studies and Italian at UCD, Aideen also studied singing at the Royal Irish Academy of Music, County Wexford School of Music and the Leinster School of Music. Aideen’s background in Psychology has helped her to develop a teaching style that brings out the best in students in individual lessons and group workshops and helps students become confident performers and overcome self-limiting beliefs. Since launching Confidence in Singing, Aideen has helped train many ‘secret singers’ in the South-East!

Aideen has a diverse range of singing education and experience, from classical and jazz singing to speech level singing. She has done a two-year stint in Newpark Music Centre, Dublin, studying Jazz Vocal Performance. Aideen has been awarded a Diploma in Popular Vocal Music Teaching from London College of Music and has ABRSM Grade 5 in Music Theory. Her most recent training was in the Estill Voice Training method which teaches the anatomy and physiology of the voice and has enhanced Aideen’s teaching considerably.

She has also studied jazz vocals in London with Anita Wardell, the BBC award-winning jazz vocalist, and Brigitte Beraha, and studied speech level singing with Masha Campagne at the Blue Bear School of Music in San Francisco. For Aideen, studying speech level singing has been a turning point in her career as it has helped her find a tone and approach to singing that feels very natural in comparison to the classical or choral styles of singing.

Before returning to County Wexford in 2015 to set up Confidence in Singing, Aideen held a variety of roles in Ireland and abroad. Aideen has a love of languages and culture, and she worked as a flight attendant for five years with Japan Airlines. Her Psychology background and interest in personal development and helping people to become more confident also found an outlet in roles such as image consultant and health advisor.

Since returning to New Ross, Aideen has managed to forge a successful career in music and singing, with her Confidence in Singing classes and workshops becoming very popular in Wexford. She is also a founding member of Rising Voices, a new community choir for people affected by suicide in Wexford. As a talented musician in her own right, Aideen also performs in concerts and events around Wexford and the South-East.

Aideen also holds a Diploma in Public Relations and a Level 6 Certificate in Training and Development.

Aideen is an Intuitive Voice Coach, Mentor and Singer. She unlocks the mental and emotional blocks to being seen and heard so that you can speak up, Sing OUT and step forward in life with renewed faith in yourself. She blends her knowledge of psychology, spirituality and voice training to uncover the hidden treasure within your unique voice. Aideen can help you to sing & live joyfully by transforming your self doubt into self confidence! Since launching Confidence in Singing in 2016, Aideen has been featured on RTE’s Nationwide, Beat 102 103, and South East Radio, with mentions for her work in Ireland’s Own and the health supplement of the Irish Independent. Aideen also produces her own original music and is currently working on new material. Click HERE to book your free Consultation
holistic singing singing lessons voice